[Team Two] Mistakes were made

Sooorry I'm a little late! Got a little busy but didn't want to skip the first round I'm back! XDD I wrote a quick snippet to get the ball rolling again.

FYI, I haven't seen the Koisuru Vampire musical but I have been tortured by the Tottsu/Taiga pics on twitter. So have a little snippet of Vampire AU fic.
[The pic] 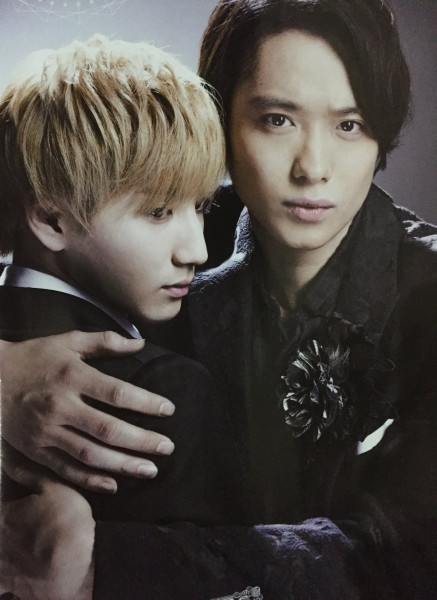 They share one last glance, a promise of more for later before the blond leaves the club without turning back. That last look was definitely for him, Tottsu thought. It was almost an invitation that screamed “follow me” across the room when sound wouldn’t reach him over the blaring music. Tottsu ran out after him, but between the few people he had bumped into and the bowed apologies he stopped to give, he thought he’d never catch him.

The cold night air nipped at his skin, sending shivers down his immortal body, his coat still sitting in the coat room somewhere. He whipped his head around looking for the boy, his heart racing when he wasn’t anywhere on the right side of the street. But one quick glance to the left and there he was, leaning against the wall in his oversized coat with that teasing smile on his lips.

“Took you long enough,” he said, pushing himself off the wall. His voice sweet and as beautiful as his looks.

Tottsu wasn’t sure if it was the moon, his nerves, or his rush out that sent his blood rushing through his veins, but he could feel his canines elongating and poking at his lip. He hadn’t even kissed the boy. He closed his eyes, shaking his head slightly, trying to control himself.

His eyes popped open again when he felt the brush of fingers against his wrist. The young man grabbed him firmly, leading him by the wrist to a nearby alleyway. Backing himself up against the wall again, he pulled Tottsu closer.

He was taller than Tottsu originally thought, and a lot brasher, but Tottsu wouldn’t let himself be led by the younger one any longer. Closing the gap between them, he kissed him with a passion he didn’t expect himself to possess. His fingers touched the cold pale cheeks of this stranger, nowhere near familiar enough to let his hands roam his body or hair.

His blood was pumping again and when he pulled back, he gasped in surprise. The same pink glow in his eyes blinked back at him. His gaze fell to his lips and true enough, the blond had the fangs of a vampire as well. A mild annoyance crept up on the blond’s pretty features.